Stronger Than Ever Before... Despite a Permanent Back Injury

By Lauren Brooks
I am constantly amazed to realize just how far I have come and how much I have changed mentally and physically. Right now I am a gazillion times stronger and in way better shape than I’ve ever been in and I have no plans of slowing down anytime soon. Much to my father’s chagrin who is certain that I’m going to hurt myself “…flinging around those damn, heavy cow-balls…”  Eileen Laughlin

Blown away by the power of dedication and proper training! Here is an incredible inspiring story written by a distant student of mine. Eileen suffered from a fractured lumbar vertebrae after being rear ended in a car accident. This was devastating for her as it would be for anyone. Years later she ended up discovering kettlebells! Now at almost 42 years old she has an amazing story to tell. She accomplished strength and overcame an obstacle that most wouldn't have thought was possible. Reading Eileen's story WILL inspire you!


Stronger Than Ever Before Despite a Permanent Back Injury


This year I will turn 42. Throughout my life I’ve always been fairly active. My main interests have consistently been weight training and various martial arts. I have rank in a few different martial arts and most notably two years ago I earned my 1st degree black belt in ITF TaeKwon-Do. Despite periodic dabbling in weight training, I never stuck with any program long enough to accomplish any results or see any real changes. 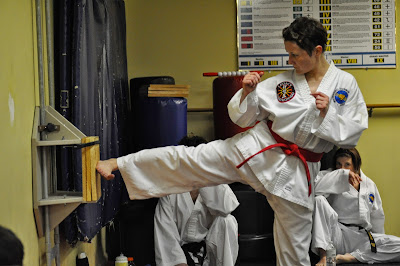 That is until I tried kettlebells about 2 years ago. I took some beginner classes at a local studio taught by an RKC instructor and I was instantly hooked. I admit that originally I was under the assumption that kettlebells were hazardous and would be a permanent for the back injury I sustained in a car accident in 2000. Totally not the case. I loved the fact that there was very specific and safe techniques that needed to be learned and continually practiced (very similar to learning a martial art). Shortly after taking the classes I discovered Lauren Brooks’ iPad app and purchased her Kettlebells for Women book. Then came her dvds and once I felt I had a decent handle on the basics I ordered her BeSLAM program. Now, I’m not the type to typically follow programs but with the comradery of the fabulous women in the FaceBook group and the short, efficient and super effective workouts I found myself progressing along in the program, having fun and looking forward to the next sessions. It wasn’t long into BeSLAM that I began to see changes. I was getting stronger and starting to notice more muscle definition appearing!!! All the more motivation to keep plugging along! By the time I completed the program in July 2014, I was stronger in all of the exercises and had begun to develop the highly coveted “kettlebooty”. ☺ 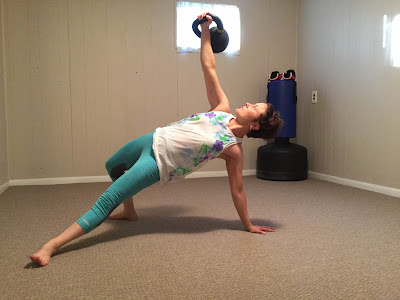 After Be SLAM I did the 12 week program from Kettlebells for Women and when that program was completed, I played around with some other programs and various workouts but realized pretty quickly that I was missing the programming and workouts from Be SLAM, so I started it for a second time. At this point I was pleased to realize that I was using all heavier weights than my first time through, and yet my strength continued to increase! It had to be magic; such a simple formula: follow the workouts (I did have to adjust a few things to accommodate my existing back injury and a Morton’s neuroma in my foot) and my strength increased!

The night before I was scheduled to finish Be SLAM for my second time I was making some tea. While it was steeping, I was goofing around in the kitchen doing pushups from the counter and then decided to see how much of a pistol squat I could do. I had only ever attempted them a few times, and never quite made it all the way down – forget about coming back up. So there in my kitchen I slowly descended on one leg and I went ALL THE WAY DOWN! To my amazement, I then reversed it and CAME ALL THE WAY BACK UP!!! I was shocked. I could not believe it. So, what did I do then? I ran into the living room saying “Hun, watch this!” AND DID ANOTHER ONE!!! Then posted about it to my FaceBook Kettlebell friends.  I was giddy like a child because this was not something I specifically trained for or practiced. It was simply a delicious byproduct of all my strength gains.  I went on to finish BeSLAM the next day and realized that in every exercise except for one, I had gone up in weight since I began for the second time. ALL BUT ONE. To put that in perspective, it took me approximately 4 months to complete Be SLAM this second time, and in that short amount of time I gained appreciable strength in virtually ALL areas. Not bad for 41 ½ years old! 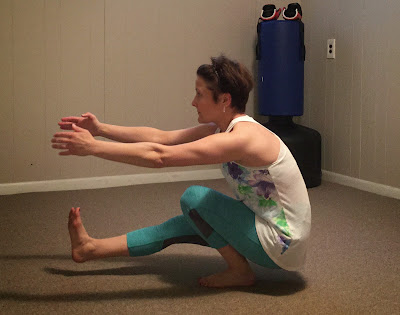 I am constantly amazed to realize just how far I have come and how much I have changed mentally and physically. Right now I am a gazillion times stronger and in way better shape than I’ve ever been in and I have no plans of slowing down anytime soon. Much to my father’s chagrin who is certain that I’m going to hurt myself “…flinging around those damn, heavy cow-balls…”

Without question, the vast majority of my success can be directly traced back to Lauren’s programs. They just work. For real. No gimmicks, nothing extreme or crazy and no fluff. I know I am not the first and won’t be the last to say it, but discovering Lauren Brooks has had such a dramatic, positive impact on my life and health. For that I am eternally grateful and a forever devotee… (and can not wait for Be SLAM2!!)