The Damage of Telling a Kid to "MAN UP"

By Lauren Brooks
To The Adults Who Tell Their Boys To “MAN UP!”

“Man Up!” she said to her son. Her son has been showing signs of anxiety come Monday morning when it was time to go to school. What she doesn’t know is that her son has been a victim of bullying for the last year. Due to the “man up” mentality, her son hasn’t felt comfortable sharing his experiences with his mom or anyone.

Dear Parents or any adult who cares for kids,

At some point someone may have told you to “man up”, or “stop acting like a girl". Maybe it was because you fell really hard on the playground or you cried because you lost a game. Maybe it was because you were made fun of by a group of kids and felt like an outcast, so you cried. Whatever it may have been, the unforeseen consequences of telling someone to "man up", can cause a negative residual effect, that can last a lifetime.

If you want your boys to grow up feeling completely disconnected from his emotions, instead learn to lack empathy, just tell him to “MAN UP!”

If you want your boys to withdraw from real conversation because he feels like what he has to say may not be good enough, just tell him to “MAN UP!”

When your boys are told to “MAN UP” you’re telling him his feelings are not valid. Instead this escalates in to feelings of shame and insecurity, while questioning himself. 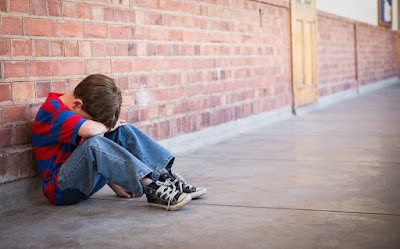 This can turn into anxiety, anger, feelings of isolation and depression.

By telling your boys those two words, when he finally has the courage to tell you about an event at school that may be bothering him, you shut him down.

Too many school aged kids are taking their own lives because they don’t have a safe place to express themselves and feel validated.

More young male teens, who turn in to young men, are abusing drugs and alcohol. Substance abuse is on the rise as a coping mechanism for repressed emotions. This can very well be directly correlated with learning to keep their feelings in, otherwise according to their own support system, they wouldn’t be viewed as a "man".

We all want our kids to be able to defend themselves and fight their own battles. Without a loving environment, support system that facilitates healthy conversation, we will continue to feed the problem.

Many times the kids who are abusive to others are actually holding a tremendous amount of anger inside. These are the very same kids that may have been told to “MAN UP!” at some point in their life.

When I say the two most destructive words you can say to your boys or girls are “MAN UP” I mean it.

Respectfully from one parent to another,

By Lauren Brooks
My blog was born March 10th of 2007, 5 years ago, with this  post  that started it all.  It all started 6 weeks after giving birth to my first baby.  The purpose of this blog was to share my journey of embarking as a new mother recovering from a C-section, lost strength, and fitness.  I wanted to share my struggles and perseverance in getting back to my pre-pregnancy self all while enjoying my new road in to motherhood.  I felt this was an easy and convenient way for friends and family that live all over the world, to see photos of my children and updates about our life.  What an amazing experience it  has been for me.  I never thought blogging my experiences would turn in to so much more.  Through my blogging I got the chance to connect with so many wonderful people around the world.  I never fully understood how powerful the stories would effect so many people.   It's truly been an honor.  Being able to continue to drive motivation and hope in to someones life by sharing my life
145 comments
Read more